Students have a hand in biocontrol 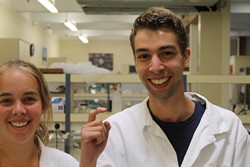 For Waikato University science students Elise Peters and Mike Davy their summer holiday job at Scion in Rotorua will probably go down as one of the more memorable.

The pair spent Christmas Day with entomologists in the Forest Protection team providing Christmas dinner for hundreds of tiny beetles being reared as part of the biocontrol programme to protect New Zealand’s Eucalyptus plantations.

“I wouldn’t describe myself as a bug person, I wasn’t one of those kids keeping jars of insects. Probably the closest exposure to bugs I’ve had was watching the Disney movie “A Bug’s Life,” says fourth year science student Mike Davy.

But since Mike’s been working at Scion this summer, that’s all changed. Mike and Elise have been tending to the needs of hundreds of tiny broom and heather beetles in various stages of development. The beetles are effective in managing weeds invading our forests.

At Scion they are being reared for a complicated series of experiments underway in the secure insect containment facility.

These experiments involve the Eadya paropsidis wasp which Scion’s Forest Protection Team has imported from Tasmania under strict Environmental Protection Authority (EPA) conditions to test its potential as a biocontrol agent for the eucalyptus tortoise beetle. This pest is damaging our Eucalyptus forestry plantations grown for wood, pulp and paper.

Entomologist Dr Toni Withers says “It’s complicated. But basically we’re testing how beneficial beetles that feast on weeds in New Zealand will work together with our proposed parasitoid wasp which feeds in and kills the prolific forestry pest, the eucalyptus tortoise beetle.

“There’s not much point in releasing the parasitoid into our forests if we find it likes to attack our ‘good’ weed biocontrol beetles as well.”

Waikato university students Mike and Elise are involved in every step of the process from collecting foliage for the beetles to eat, measuring their growth and then recording data from the experiments with the Tasmanian parasitoid wasp within Scion’s secure insect containment facility.

The research data forms part of the benefit/risk assessment that will be sent to EPA which has the final say on whether or not the Tasmanian wasp is released into New Zealand. For students like Elise, who is in her third year of a science degree at Waikato University, having this level of hands on experience is mind blowing.

“In my first few weeks at Scion the beetle eggs were dying. We had to figure out why and what to do about it. It turned out there was an infestation of a parasite. We had to abandon that beetle colony and start again. That exposure is a big step up from the three-hour controlled lab sessions we have each week at uni.”

Elise and Mike really weren’t thinking of a future in forestry when they started their science degrees, but their summer jobs at Scion may have changed all that.

The work Elise and Mike are doing is part of a Scion-led NZ Farm Forestry Association project that has received funding from the Ministry for Primary Industries’ Sustainable Farming Fund and forest industry partners.

“Summer students are part of our programme for developing New Zealand’s future scientists. Providing hands-on experience in the field, in laboratories or workshops is invaluable for university students and we hope will cement their desire to pursue a career in science.

“We benefit too by boosting our workforce during a traditionally busy time for some experiments, but above all, regard summer student employment as a service to the community,” said Ms Tane.